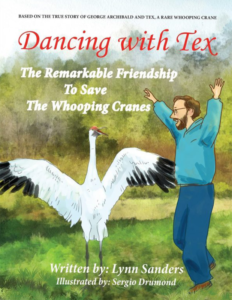 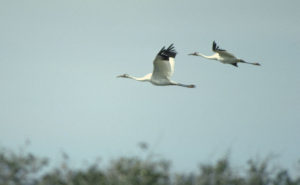 We’re standing at a crossroads in caring for our planet.

No one knows what will happen to our environment. It’s up to each of us to be aware, speak up and be proactive. The lives of many endangered species hang in the balance.

I’m doing my part to raise environmental awareness among youth through my newly published children’s picture book, Dancing With Tex: The Remarkable Friendship To Save The Whooping Cranes. The book received rave reviews, and is already being carried in several stores,
nonprofit environmental groups and on Amazon.

To promote my book, I’m planning an Amazon best-seller campaign, encouraging customers
to buy this inspirational book on Cyber Monday, November 28th. Half of the proceeds from Amazon’s book sales on that day will go towards the nonprofit, Center For Biological Diversity, a leader in saving the world’s endangered species. Customers will also be entitled to free digital gifts.

Dancing With Tex tells the true friendship story between a man and bird, and also reinforces positive values for youth. The emphasis is on having faith, belief and perseverance in your dreams.

The story is based on the true events between Dr. George Archibald, co-founder of The
International Crane Foundation and a world-famous ornithologist and a rare bird
named Tex, who believed she belonged with people. In 1995, while on a video
shoot, I learned how Archibald danced with a rare bird, who believed she
belonged with people. For six years, numerous challenges were overcome until
Tex finally laid a fertile egg.

The egg finally hatched into Gee Whiz, whose numerous offspring helped save the Whooping Cranes from extinction. The event was so significant that TV host Johnny Carson interviewed Archibald as a guest on his program.

Just as George and Tex had to persevere over many years, I found myself in the
same predicament while trying to get the book published. In my case, the process took
close to two decades!

“The manuscript was accepted by a small publishing company, The Benefactory, in
2006, but then they ran out of funding.”

“A few years later, as part of a musical writing workshop, my colleagues, Jenny Stafford and
Russ Coutinho and I created a fictionalized musical of this story, A Whooper’s Tale: The Incredible Story of Tex. The show got wonderful reviews during our two readings at Theatre Building Chicago. Unfortunately, the theatre was sold right after the performances, and no more readings were held.”

I put the manuscript on hold for a few years, attempting to send it off to publishers
occasionally. Finally, another children’s writer from a professional association contacted me to say she’d like to take my story idea and adapt it for her own children’s book. The writer informed me politely that no one can copyright an idea.

That nudge was sufficient to stir me into action. I told this unnamed writer that I didn’t would want her taking my story idea. While still taken aback, my son Andrew suggested that I just “forget the story and move on.” It had been so long…

Realizing it was totally up to me to bring this unusual story to the masses, I ran a
crowdfunding campaign on Indiegogo to pay for illustration costs. When one illustrator was too expensive, I worked with another. The second illustrator worked on the project for about six months, but the drawings weren’t quite what I envisioned. So, it was back to the drawing boards to search for a new illustrator.

Posting an ad on Outsource, an online freelance site, I landed up with 93 applicants for the position! Discovering Sergio Drumond, a world-class artist from Guadalajara, I hired him, and the project started moving forward smoothly. Or so I thought…

(At this point, a good writing teacher would recommend adding one last conflict to make the story even more compelling.)

Yes, there was still another obstacle to overcome.

On October 25, 2015, our family encountered an unexpected and scary situation. Our son Andrew had a sudden stroke! For three days, our son lay unconscious at Evanston Hospital’s intensive care unit. When Andrew finally awoke and needed rehabilitation, my husband and I did everything we could to stay calm and be positive.

Coming back from hospital visits, I’d find comfort in working with the illustrator on the book. Fortunately, Andrew recovered. Despite a year’s delay from the anticipated publishing date, Dancing With Tex finally made its debut on Amazon this past summer. You can’t imagine how joyful I felt to hold the book in my arms! My eyes filled with tears. I actually whooped with joy. Now, it’s time to spread the word and raise environmental awareness. We all must speak up to save our endangered species.

Both the book and the behind the scenes story share the elements of having faith,
belief and perseverance in making a dream come true. It’s an example of how we all can accomplish our dreams if we don’t give up.

After the story was published, I received a thank you card from Archibald. “Congratulations
on the publication of Dancing With Tex. It’s beautiful and well presented after such a prolonged birthing. I hope it touches the hearts of children and bends them toward the environment…. Thank you for telling this story.”

While most people don’t know the journey behind this story, I love to autograph books with the message, “Keep Your Dreams Alive!” I certainly learned to do just that.